Skip to content
Home » News » News » Conferences in Chicago Past, Part I

From time to time, we dig into the AMM Archive to see what museum professionals were talking about decades ago. This week’s article is a look back at Chicago conferences by Ashlee James, soon-to-be-graduate of the IUPUI Museum Studies program and volunteer at AMM.

Did you know that 2018 will be the sixth time the great city of Chicago has hosted the Association of Midwest Museums? The first time was in 1946! Seventy years ago, the AMM—or rather, the MMC, as it was then known—was not quite as sophisticated as it is now. With the organization barely twenty years old, Chicago was apparently the largest city so far to host the annual conference, and President Robert Hatt had high hopes for it:

“This meeting should easily be the most successful one ever held by the Conference since Chicago’s resources, personnel and techniques are so enormous that attendance should be fine. I hope, on the other hand, that your Committee will not plan anything too elaborate for this causes embarrasment[sic] to smaller cities whose turn might come next. Too, I feel that if the Local Committee does too much the Conference might not be welcome to come again. Your city has much to offer and even just a tour of the museums would make a splendid Conference.”

The conference itself was very different from modern programs, where most people shuffle from presentation to presentation, and sometimes never leave the building in which the conference is being held. The 1946 conference, however, featured a series of combined lecture-tours through all the major Chicago museums: 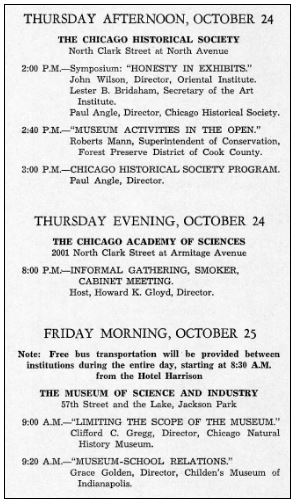 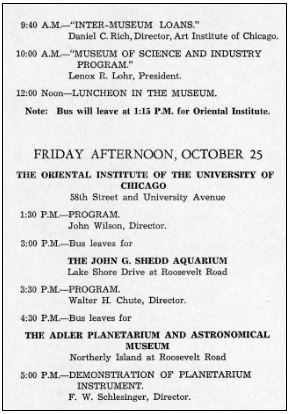 Talk about hands-on experience! How many of the Windy City’s biggest institutions have you been able to get a personal tour through?

By the time Chicago hosted the conference again in 1955, the MMC had grown considerably by adding three more states to its circle: Minnesota, Missouri, and Iowa. Organizational membership had more than doubled, from 180 to 385. So what was on the conference agenda this time around? Television! In addition to another round of tours through Chicago’s major museums, the main body of the conference focused on the potential uses and impact of television for museums. This included an extended “Quiz the Experts” session with personnel from several museums. According to the AMM archive, the session began in a rather amusing fashion: 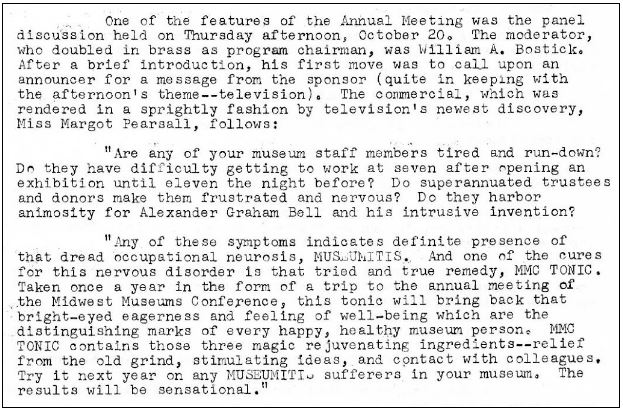 Do you feel like you might have a case of “Museumitis”? Does a good, strong annual dose of “AMM Tonic” fix you right up? We hope so!

After a fairly significant gap of time—26 years, to be exact—Chicago hosted the 1981 MMC conference. (Letting some of those newly included states get their chance at hosting, perhaps?) By this point, conference themes had been established. 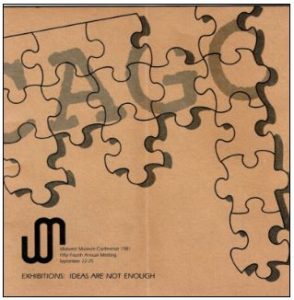 The 1981 theme was “Exhibitions: Ideas Are Not Enough” and focused on practical knowledge, such as design and fabrication on a budget, travelling and multimedia exhibits, educational program planning, and labels. The last day of the conference included sessions about marketing and evaluation, operations that go hand-in-hand with exhibition development and both of which have grown dramatically as areas of interest in the last decade. How did exhibit design and development factor into the more recent conferences that focused heavily on collaboration and the connections between museums and people? Do you think exhibits are still the main draw in museums, or are programs supplanting the physical spaces?

2 thoughts on “Conferences in Chicago Past, Part I”