Discoveries from records for 90 years of conferences and, more broadly, a shared history of Midwest museums

There’s never a better time than a big anniversary to take a moment—or two, or three—and look back at the long path that got you to the present.  The Association of Midwest Museums is turning ninety this year, celebrating almost a century of museum professionals meeting and discussing the ups and down of their organizations, what changes were on the horizon, and the perpetual problems they always seem to be facing.  The AMM is lucky to have an almost continuous record of two important facets of the organization: member newsletters and convention programs.  Together, these resources create a surprisingly complete picture of the form and function of museums in the Midwest since the 1920s: what challenges they faced, what solutions they developed, and whether those ideas failed or succeeded.

Although early conventions lacked the organization of later ones, a glance through the program schedules reveals some common themes: exhibit design, educational programming, and conservation.  These are the constant problems faced by museum professionals in a world that changes even more rapidly now than it did when MIMA was founded.  Take a look at these excerpts from two convention programs: 1944 and 1994.  Do you see how many session titles have almost the exact same subjects?

The content of “The children’s museum in a postwar world” and “Museums plan for youth” in 1944 probably shares a lot of similarities with “The Roll of Teens in Museums: Providing Informal Education Programs for Minority Youth” in 1994.  The same could be said with “The museum in the modern world” and “New horizons in the museum world” in 1944 when compared with 1994’s “Changing Paradigms: Can Museums Respond to Them? Will They?” and “Military Museums in the Post-Cold War World: What role in the ‘Politically Correct’ 1990s?”  Remaining relevant and creating environments for families and young people are continual challenges that museums must constantly evaluate and reevaluate.

And in 1951, with the MMC newly affiliated with the AAM, questions of responsibility between the two organizations were debated by a discussion panel, along with a panel discussing the most recent technological innovation: television, which was rapidly becoming the primary method of disseminating information instead of radio. 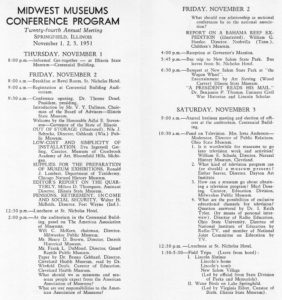 Fifty years later in 2001, sessions like “Cultivating the On-line Community: Technology’s New Role”, “Resource Hall Presentation: Different Roads to Accreditation”, “The Future of IMLS: A Dialogue with the Museum Community”, and “Connecting to Communities via the World Wide Web” demonstrate that museums face the exact same dilemmas in the twenty-first century as they did in the twentieth–working with and within national umbrella organizations and governing bodies, and how to keep up with and use current technology to attract and communicate with their audience.

As the AMM heads towards its hundredth year, it’s important to remember that while the face of the problems may look different, and the solutions have to keep pace with the times, the core goal of museums remains unchanged: to showcase the past, in order to teach the present, in order to inform the future.  And it never hurts to apply that same technique to ourselves on occasion!

2 thoughts on “The More Things Change, The More They Stay The Same”